Skip to content
HomeOpinion – Use of the Term ‘Gamer’

Gamer. It is a pretty loaded term in modern society, isn’t it? Between negative press, dilution into mainstream entertainment and a breakdown within the gaming community, there has been growing opinion that the term ‘gamer’ has become redundant or elitist. I would like to put forward an argument to counter this rising sentiment.

For me, gamer has always been a term of acceptance, a label that applied to me that wasn’t directly insulting. When I first started playing video games it was still seen as a social stigma. Words that are positive now such as geek and nerd were insults back in the Nineties and gamers were outcast basement-dwellers. Games were an escape and finding others who played games was the only way that I could make friends since my social anxiety has always made small talk difficult. Gamers back then were kindred spirits in a hostile world. It was an ‘us versus them’ type mentality so there was no room for infighting.

Gaming has become a mainstream activity now. Lots of people play games but does that make them gamers? I see gaming culture as fitting into two main sections. Hours played does not really factor into it. Instead it all comes down to passion, which is admittedly hard to measure. The first group are people who play games. They will play a handful of the most popular releases in a year such as Call of Duty, Fifa, Madden, Grand Theft Auto and Destiny. They play these games for entertainment and that is as far as it goes. It is like watching TV or a movie, fun while it lasts then move on. There is nothing wrong with this at all but for me, I do not consider them gamers. Would you consider women who spend hours a day on Candy Crush Saga gamers? I see it as much the same.

The second group are the gamers. For them, gaming is a passion, more than entertainment but a lifestyle. Think of it this way, lots of people watch and enjoy television. Only a limited few become TV fanatics. We see groups like Whovians who are heavily invested in Doctor Who. Not every person who watches and enjoys Doctor Who is a Whovian. It requires something more, a fervour that goes beyond entertainment. Gamers represent this level of involvement in the industry.

A friend of mine had played no other game but Destiny this year. He has put hundreds of hours into it. I dislike Destiny and have told him so. When we talk though, it is usually about Destiny and I tell him the latest news and hidden bits of the story. He asked me why I read so much about Destiny when I so clearly disliked it. This got me thinking. I spend as many hours reading and listening to games related media as I do actually playing games. I know details about games that I don’t even have an interest in ever playing. To me, games are more than entertainment and so I go beyond just being a player of games. I am a Whovian of games. What better term to encompass that than gamer?

But is the term elitist? You could argue that ‘gamers’ see themselves as more skilled/knowledgeable/involved with games than others who are just trying to enjoy the content but then this is the case with any fandom. There is a certain level of snobbery that comes with passion I suppose but that comes with being a fan of anything. At its most basic level, being a gamer doesn’t mean anything special. It means that we spend more time and effort than we probably should on the matter. In real terms there is nothing to be elitist about except for the mental perception of a unified group who share in a single passion. Having an exclusive group is not inherently bad so long as it is done right. Respect people whether they play nothing but CoD or if they play every new release and things will workout alright. 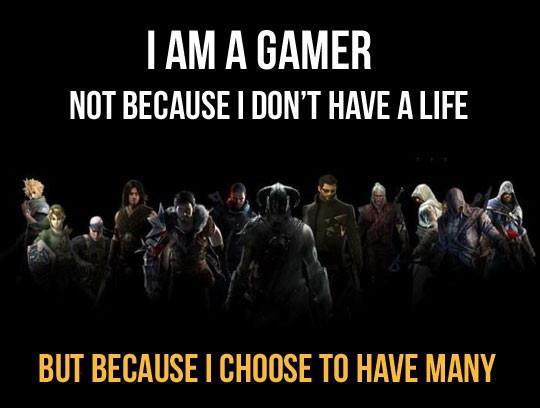 I am proud to call myself a gamer and see the sense of community that the term once brought was a beautiful thing. I only hope that we can all come together to resolve the issues that plague the industry and form a strong community once again.