Many Souls veterans forget how hard it is for people who have never played the series before to get started. As such, this is a quick guide to help early players get a few cool items that will help them at the start of the game.

The first bonfire from Firelink Shrine on the High Wall is where you need to be. Head down the steps to your left towards the scary looking dragon. Kill the Undead swordsman then run towards the steps leading down. Kill the guy with the lantern before he can finish his scream/call as this causes several of the docile hollows to attack you. With him dead you can butcher the innocent bystanders as they cower in fear Nasty I know, but think of the souls. 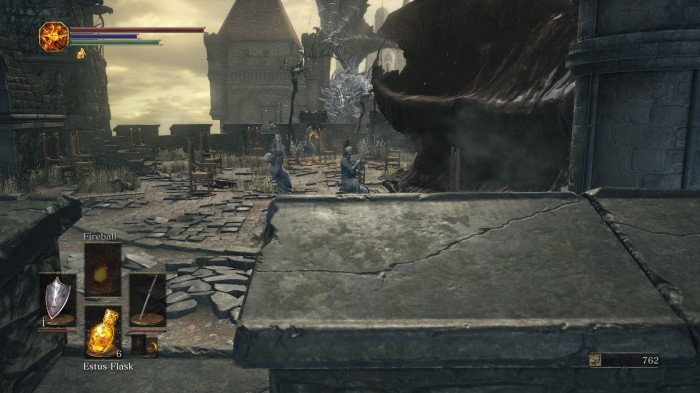 Head up first and kill another lantern hollow before he can wake up the enemies then clear this area too, including the two hollows up the stairs. If you have already triggered the living dragon then he should be sat on the next tower over. Run up to the wall facing it and the dragon should breath fire and kill all the hollows between you while not reaching you with the flames. Keep him attacking until all of them are dead. 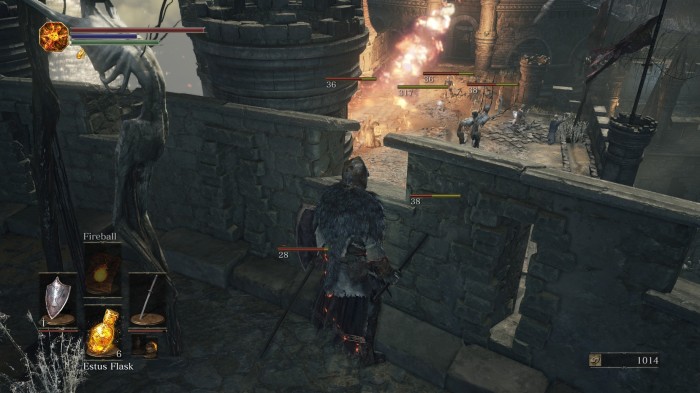 Now go back and travel down the steps, killing the three hollows inside and descending the ladder. You will be on a lower path now with a spearman and a crossbowman. Wait until the crossbowman has wandered a but up the path then attack the spearman. The dragon should breath fire along that path, killing the crossbowman and a group of hollows at the other end. If not then just move around until it spots you. Kill the spearman and make sure that no more hollows come onto the path from the other end. 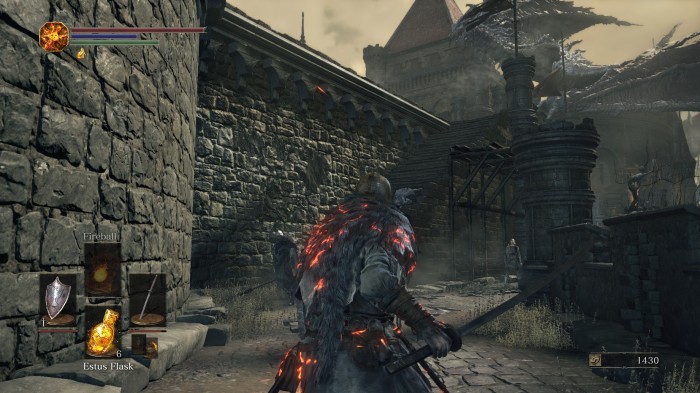 You should have gained 1364 souls from this quick trip. The next bonfire is close by. Run past the fire down that path, go up the stairs and immediately turn left to kill two resting hollows. They will attack you from behind when you try to fight the sword and shield warrior so deal with them first. If you can’t beat the knight then run straight into the building he was guarding and take the door straight to your right. Run up the stairs and boom, bonfire. 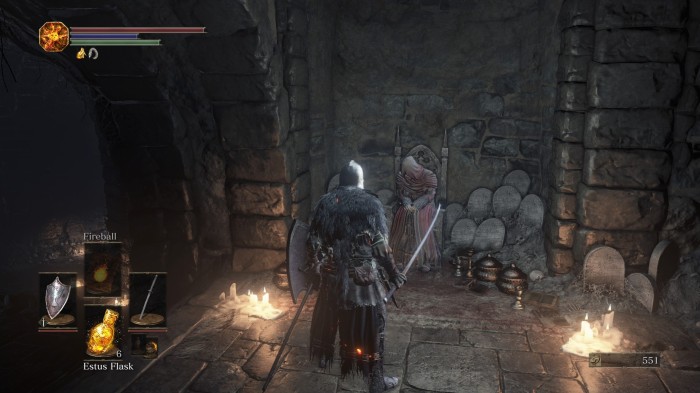 That isn’t what I’m here to tell you though. The old maiden back in Firelink sells a key at the hefty price of 20,000 Souls. This is a massive amount early game worth several level ups. By running that short gauntlet up to the spearman, (ignore anything past the dragon’s flames), you can quickly amass souls though. When you get the hand of it the journey is only two minutes then back to the bonfire to reset the enemies. Rinse and repeat. 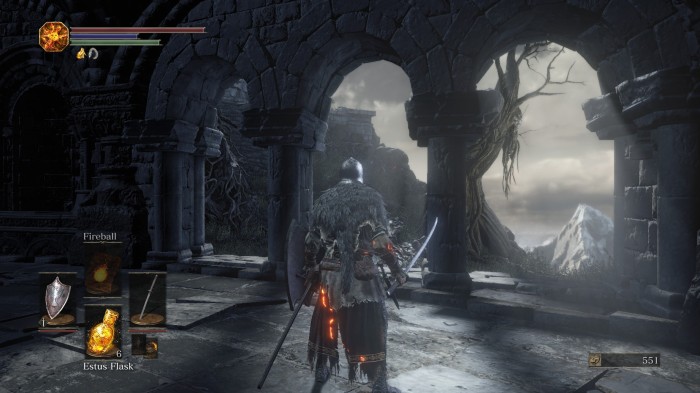 Go back and buy the key then take the stairs up and to the left. There is an exit from the shrine here that leads you to a tower if you go left. Open the tower with the key and make your way up. 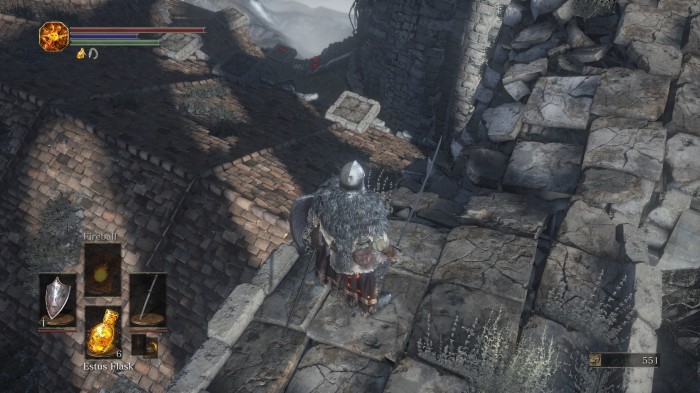 Half way across the bridge is a crumbled section that you can use to drop down onto the shrine’s roof. Jump down. 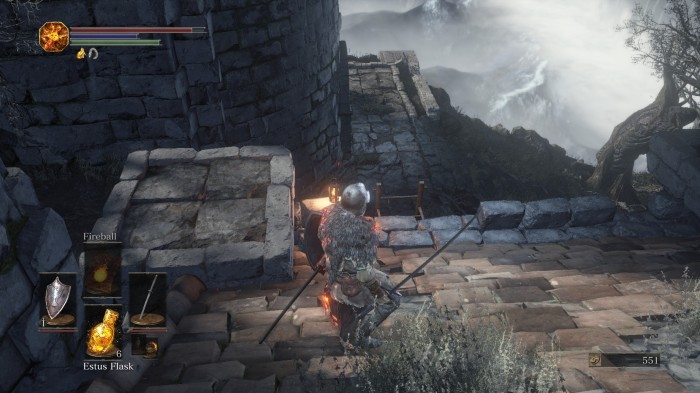 Kick the ladders at the side for quick access back up. There are some items scattered around and at the centre is a nest where an invisible girl will talk to you. Search Google about the crows for info on how to interact with this NPC. 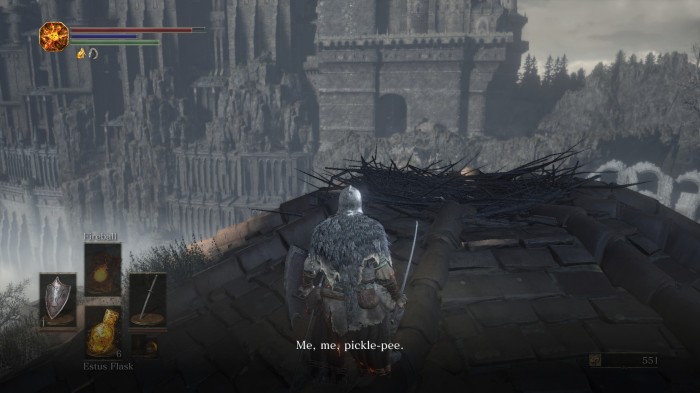 Walk to the edge of the roof at the front above the main enterence to Firelink and there should be a ledge. Drop down onto it and start smacking the walls to find an invisible door as shown below. 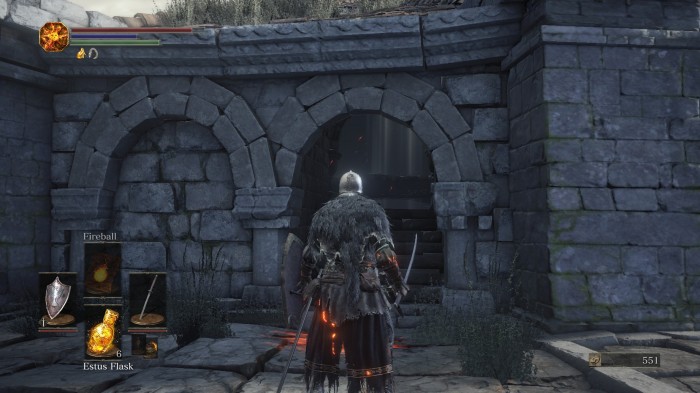 Explore the rafters of Firelink then head along in the direction of the centre throne. There will be another illusionary wall blocking your path. Dispel it then hop down to find a chest with the Covetous Silver Serpent ring inside. 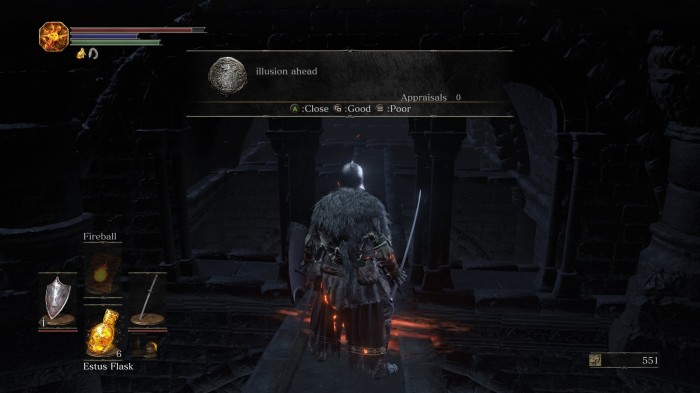 This ring increases the souls that you gain from every enemy. Not by much but enough to help early on. With it equipped our earlier farm along the Highwall goes up to 1486 souls, an increase of 122 souls. You can repeat this area as often as you like to get plenty of early level ups or weapon upgrades.

But first go back to the tower and fully cross the bridge to the second building. Take the lift up and grab the Firekeeper’s Soul. Head back down the lift and look to either side of the walkway. You will see a long fall, lots of coffins and some items. Parkour your way down either side, grabbing the item. If you don’t miss a jump you can make it down without taking much damage. 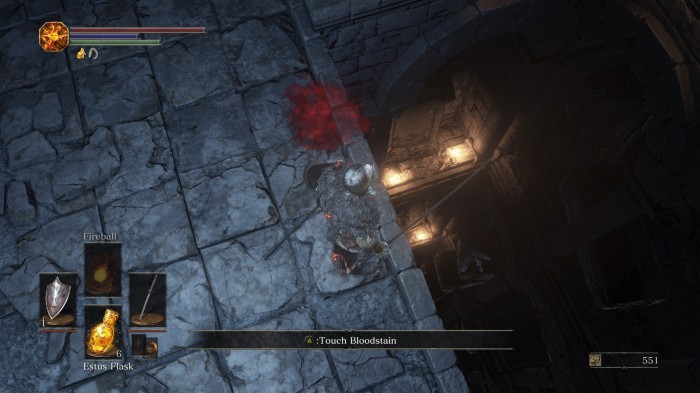 Open the gate down there and, if you haven’t killed the old guy with a katana yet, give him a hearty backstab. Whatever happens, go back up there again to grab the second item from the other side. You end up with an Estus Ring which increases health gain from flasks and the Fire Keeper armour set. Added to the other items that I can’t recall of the top of my head and it won’t be a bad trip.

Is it work the 20,000 souls? Couldn’t say. But then, what is 20 minutes grinding compared to some cool loot?