Having had a few weeks to mull over Nier Automata since completing it and taking the time to read/watch several reviews, I’d like to layout my final thoughts on the game and offer a closing review that coves the game’s whole scope rather than my first impressions review. Obviously there are spoilers ahead.

I’m not planning to retread old grown. My more general thoughts haven changed so for mechanics and the like you can read though my original review here, and for my feelings after Ending E that cover a major theme of the game then you can check out this.

My original score for Nier Automata was an 8, which in my system is a god score. Too much hyperbole exists within reviews now with many looking at anything less than a 9 as somehow bad. But for me, some of my all time favourite games I would score as low as 7 because to me a score should include mechanics, scope, characters, story and enjoyment. Something that I absolutely loved could be clunky and sparse of content while something I personally hate could be a masterpiece. In my head, an 8 is a great game that I would recommend to everyone.

So do I still feel that the same score still applies to Nier Automata? No. It took me a lot of thought to really place the game on the almost arbitrary scale of review scores though. Most reviews that I saw sang NA’s praises with many mainstream reviews scoring it around my own original mark. Several other reviewers felt that so much praise made no sense only scoring 8s and gave it a resounding 10 as an industry changing masterpiece. Jim Sterling went so far as to beautifully say that “If history forgets this game, then fuck history“. And I fully agree with this sentiment. I still can’t give the game a 10 though.

In my mind, a score of a 10 is to say that a game is as close to perfect as you can imagine it to be. The two game that I would personally give a 10 to are the original Dark Souls and The Witcher 3. With many games, Nier included, I look at them and can see ways that I think it could be made better. I look at something like The Witcher 3 and I genuinely cannot imagine how it could be made better in any truly discernible way. 1-10 scores are limited by numerical constraints. How do you show improvement once you have hit a 10? With seperate games this is less important as different games can be close to perfect while still having very different levels of quality or mechanics. Within the same series you find yourself trapped.

Nier Automata was not expected to be a success. The previous games were cult classics but in no way were they big sellers. Platinum games are well known but not really considered as big AAA sellers. It was also released at a time where the market was flush with massive titles from a new Legend of Zelda, Horizon Zero Dawn, Mass Effect Andromeda, etc. Nier exceeded all expectations. What I imagine to be little in the way of development funding created something so damn good and now Square Enix is aware of what they have in there hands they will likely allow Yoko Taro a little more freedom and finance.

Now, imagine what Yoko Taro could do with this extra backing. Nier Automata was a solid game in every way that shook up the way that games as a medium can be used but it could have  gone the extra mile in so many ways. Lots of reviews focus on how great the game was, and I echo this sentiment, but for today I want to look at what the game would have needed to push it from the 9/10 that it now sits at in my head to that glorious position at the pinnacle of gaming.

One problem that I had from the start was character depth. This definitely improved over the course of the game but never to its fullest potential. 2B comes across as the bland badass like Final Fantasy’s Cloud and Lightning but that isn’t really who she is. She is sold as the primary protagonist, but again, she really isn’t. 9S does the vast majority of the speaking in the game with 2B’s contributions consisting of little more that “this isn’t part of our job” and “I don’t care”. Then she dies and the game continues without her. She is the glue that holds the narrative together but it is very much 9Ss story.

When 2B is good she is great. But it is only after she has died that we start to get real information about her. Nier does this a lot, presenting interesting characters that are mostly developed through missable flavour text or other character dialogue.

A2 suffers much the same problem as a renegade warrior with no presented backstory or character motivation. He character on the surface consists of a hatred of machines. She kills them because of this and lives off the grid. This is all that we know about her, even when we get the chance to play as her. Unless you do certain side quests you could complete the game without ever learning more about her. Even if you do learn more, it is still pretty limited.

In fact, many of the unnamed side characters are more fleshed out than our protagonist, their small story arcs actually reflections of the main characters. An example of this is that we learn that 2B is actually a unit designed to kill other Yorha units. This revelation is made at the very end of the game after 2B has already been killed. Because of events at this point, there is little time to dwell on this or engage in the emotions she feels having to kill her friend over and over again. However, we do get this exact same story as a side mission earlier when we must piece together the identity of a killer. An amnesiac android wants to find who killed her friend so she can seek revenge but we actually discover that she herself was the killer because it was her designation to hunt and kill other androids. Here we are allowed time to experience the emotions, feel the despair and manic objectivity of the character. 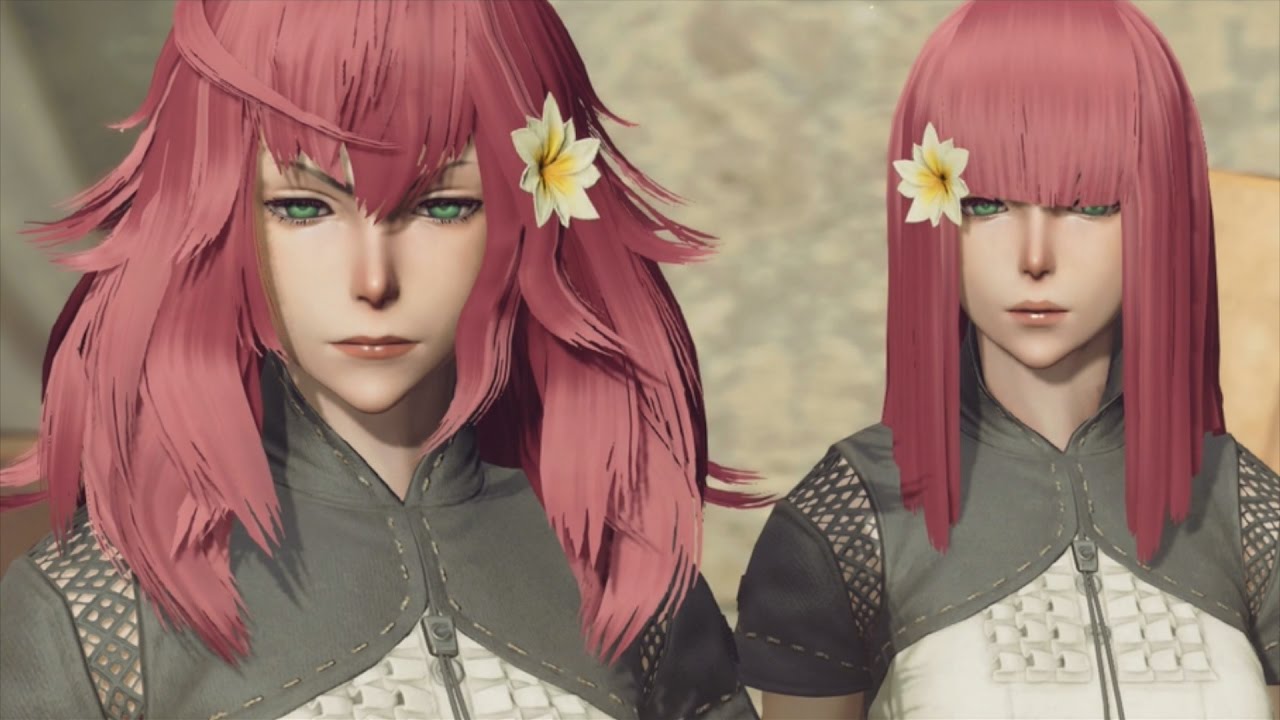 Another example of this is when we help a Resistance member search for his companions. We follow their individual trails only to find that each has already been killed. I played this as 9S, who at this point had just lost 2B and was having a mental breakdown because of his grief. We return to the android to tell him of their fate and he tells us that he gathered flowers in their memory, an old human tradition. I missed the next half of this story at first but if you go down the elevator in the shopping centre to the lunar flow cave then 9S will place a sword there as a mark of remembrance for 2B. It is such a touching moment that develops his character and is so easy to miss. I actually like that fact but wish there we similar things for the other characters. 9S is the only one who ever gets these moments when so many of the characters have the potential for them too. They certainly deserve them.

Something else that was handled well but could have been improved was the map. The world that you traverse is varied and interesting with lots of differing heights and zones. As you progress through the story the world changes to match the events of the story. It evolves, making its one small map feel bigger than it really is. New objects appear and craters cut out sections of land. It is a clever way to breath new life into the world and works very well for the first play-through. 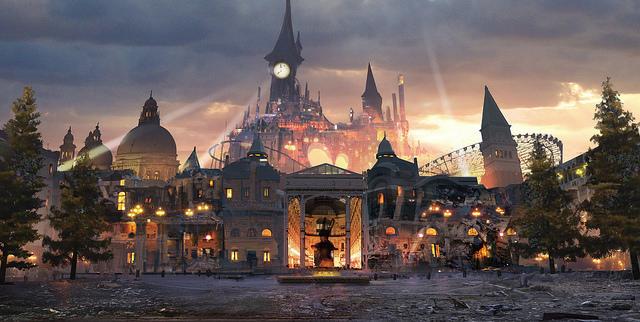 But by the time Route C comes along it does start feeling tired. The story takes a massively dark turn in tone and we have basically a whole other game’s worth of content to play through but we aren’t really offered any new areas to explore. There are white pillars that spring up across the land and the new machine towers that need fighting through but these don’t exactly feel new or interesting. The main landscape hasn’t changed in any way that forces you to relearn the map. I found that in Route C I was drawn more to hopping from objective to objective, the world taking a backseat to the story. It really needed some new locations to spice up this latter half of the game. The menu map seems to have a lot of greyed out space around the existing area so I actually expected more. Instead Route C felt somewhat claustrophobic and dull, held aloft by the compelling narrative and smooth mechanics alone.

On a similar note, A2 seems very underutilised. She feels almost like a cheap 2B replacement when she really shouldn’t. Stepping out from playing as 2B to 9S was a massive change that introduced a new gameplay mechanic and allowed the access of locked doors and chests. Moving onto A2 was a return to another simple fighter. She has a berserk mode rather than a self-destruct option but in all honesty I never really used this. She can do nothing of note that the other two characters can’t do. When her personality and combat style is so similar to 2B it creates a slightly hollow experience for me. I would have loved her to have a bigger role. 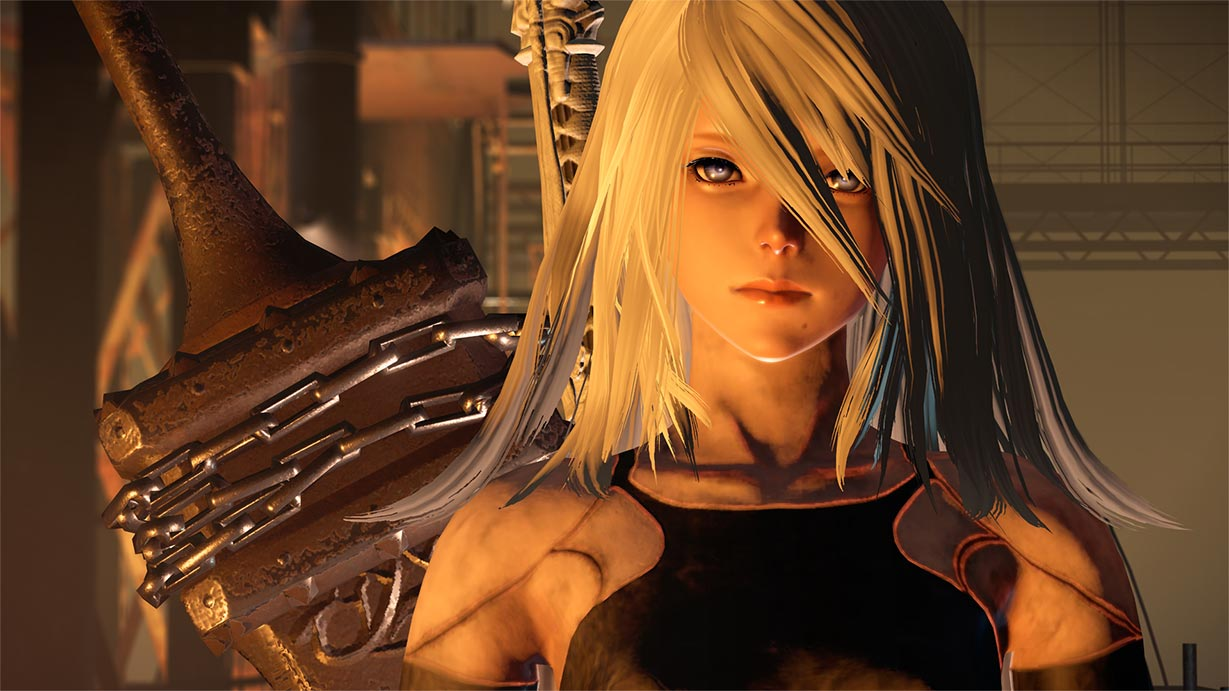 I would also have loved to see some more playing with the medium interwoven throughout the game. Ending E was a beautiful expression of what can be done with games and really blurred the lines between player and character. Other elements like the different camera angles and game modes play thus up mechanically, as does the way that the HUD reflects what chips you have and what condition your character is in. This isn’t so much a criticism but it is certainly something that I would have liked to see more of. Not to the point where it became gimmicky but if any game can pull it off well it is this one.

So take this post not as a knock at Nier Automata but as an endorsement of how much I am looking forward to Yoko Taro’s next venture, be it a sequel or another semi-connected new IP. There is DLC on the horizon that I am eager to play and I thoroughly encourage anybody with an interest in games as a medium rather than just as entertainment to play this game, whether you enjoy it or not. Don’t let bigger named titles overshadow this important steppingstone in the industry’s history. 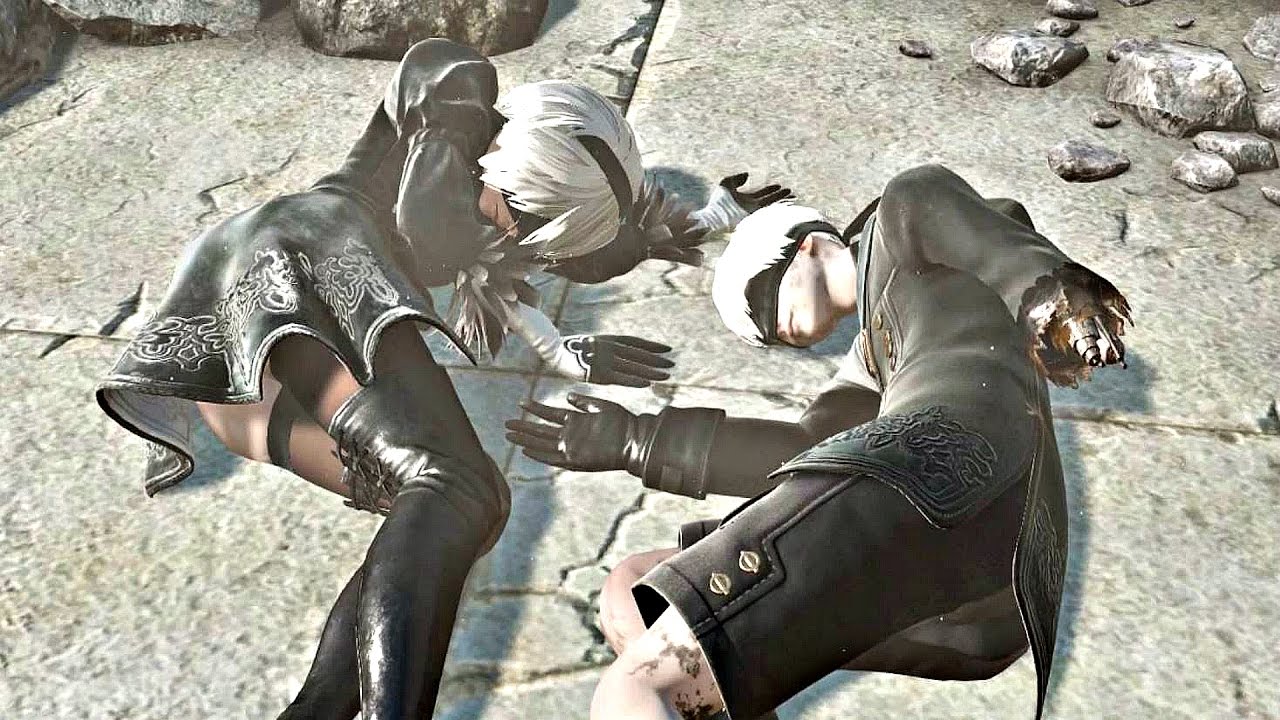 I still have some thoughts on the game that tie into other topics so I will be writing about it again, (possibly as soon as next week actually…) but this piece will represent my full review going forward. So, while it is not quite a 10, Nier Automata scores a glowing 9/10. A great game that I hope will lead to an even greater future.