In early games, death was there as a fail state. The player lost and couldn’t experience the full game. Since each attempt meant another coin into the arcade machine, failure and death were a very common thing.

Games no longer rely on repeated attempts to make money, and narrative is a much larger part of the experience than it ever was before, but death during gameplay is still very much a thing. It still holds its place as the generic fail state but fails to be anything more.

Mechanical death, or death caused by the game’s mechanics as a direct effect of a player’s actions, isn’t really treated like a death. There is no sad music leading up to it or cinematic shots, because the character is destined to survive, rendering the player’s skills and actions as obsolete, their failure creating little more than roadblocks. The deaths are there for the player alone. This makes mechanical death nothing but a frustration.

Recently though we have begun to see games that have a new take on mechanical death. Until someone thinks of a smarter term I’ll refer to it as Narrative/Mechanical Synergy. Think of it as being the opposite of Ludo-Narrative Dissonance.

The first game that springs to mind when I think of this concept is Dark Souls. Where most games treat mechanical death as a point to reload the save or checkpoint, Dark Souls makes sure that we are aware that each death is canon. Your character really suffered and died and lost something tangible in the process. Immersion is kept because both character and player shared the experience.

You can find the spot where you died and see the blood you had spilled. You can also find the souls, or experience, that you lost upon that death which you can now regain. This means that the experience you had isn’t wiped out as though you had never gained it, but is rather temporarily displaced until you can fight your way back to it. Because of this you can keep levelling up even if you die regularly so long as you are able to touch the spot of your previous death before you meet another grisly end. It creates a learning curve rather than a reset point.

There are still things with this system that limits the impact of these deaths though. No body is left, your character apparently turning to ash to be reformed at the last bonfire with all of your equipment. On the whole though, death has meaning and synergy between character and player are more closely aligned.

A game that takes this further is Neir Automata. In Neir Automata, you play as an android soldier in a war against robot lifeforms in a post apocalyptic Earth. Drawing heavily from Dark Souls in terms of death, when your character is killed it is counted as a canon death. Unlike Dark Souls though, playing as an android allows the designer to mess around with the game’s mechanics even further.

Upon death a physical body is left behind while the data that makes up your character’s memories and personality is downloaded into a new body. When you find your previous body you can recover any chips that were equipped to it or resurrect it as a puppet to fight at your side. 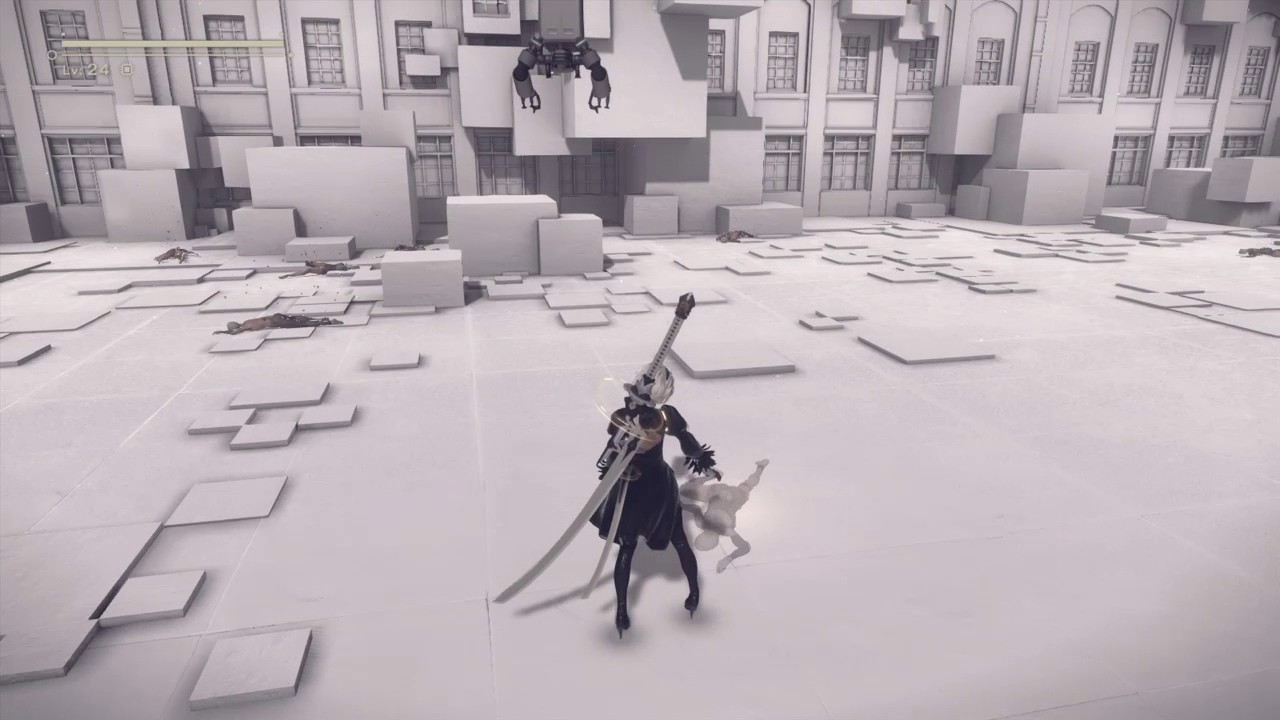 As well as the physical body though, Neir plays with the characters’ memories too. The game can only be saved at specific points throughout the map that are boxes connected to the space station that the androids call home. These boxes store fresh bodies and also serve as data upload points where current versions of the character’s memories are backed up to the server. When you are killed, the memories that are downloaded to a new body are those that were most recently backed up. and experience gained since the last save will be lost even if equipped chips can be salvaged.

Nier Automata also does a good job of making each death feel like a death. Colour drains from the screen and both visuals and audio become distorted, the sounds and music sounding far off as you struggle to get your bearings.

Dark Souls narratively mentions these repeated deaths as something that will just happen. It is just something to pick yourself up from and move on. Neir goes out of its way to reflect on it. We see the characters die in a cut scene at the start of the game in a touching scene and time and again the characters discuss death and dwell upon the fact that the people they are right here and now with the memories and thoughts in their heads won’t be the same people that come back. The player even begins to question the lives and deaths of the robots that you’ve spent the last few hours butchering. By tying the player and character together close enough to create empathy, the players feels closer to all of the characters because of the common themes that link them.

Both of these examples rely on abnormal characters for these mechanics to work. These techniques wouldn’t work with regular human characters since we can’t pick ourselves up after death to try again. So can games more grounded in reality still achieve similar weight to mechanical deaths?

With some games you wouldn’t want it to. Games like Super Meat Boy are designed for quick cycles of death. They are reminiscent of older games where the challenge is the main factor of appeal.

I would also never want to try to remove death or failure from games as being able to lose in an intrinsic part of what makes a game. Some games treat death as an end and delete any progression to that point but this is pretty extreme and would put a lot of players off.

Mechanical deaths that lead to restarting from saves or checkpoints aren’t bad. It is just interesting how games are going above and beyond what is possible in traditional media. Games such as the original Star Wars Battlefront are examples of this with every life being an individual soldier rather than a character respawning. This experimentation is where games excel and as mechanics and narratives become increasingly entwined we will hopefully see some really cool and engaging games. In the end, games are at their best when they aren’t just trying to mirror movies but are allowed to revel in the uniqueness of their gameplay mechanics to bring players and characters closer together.